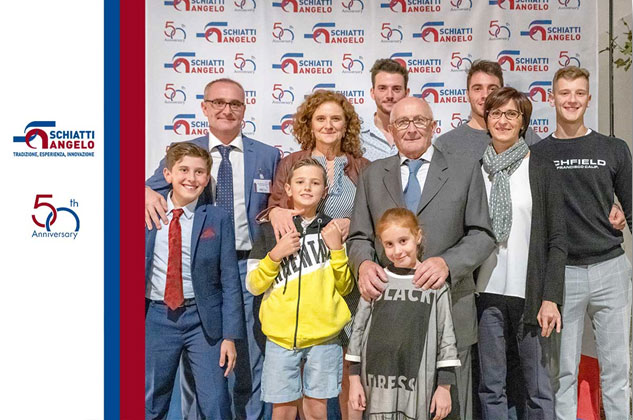 It was the communication campaign that Schiatti Angelo srl, company specialized in the manufacturing of  glass working machines, has chosen for 2019.

The campaign tells about company’s core that, in its over-50-years history, has always  kept some constants : the passion and commitment for its work and customers’ care.

In over 50 years, many things happen: technology changes, innovation and experiments, successes and – of course -  some not so well-gone attempt. Alessandro Schiatti was right during his speech in occasion of the 50th anniversary event: “it was in a Seregno workshop that my grandfather assembled and  disassembled again and again until he obtained the machines, of which we are now proud about”.

In his stand at Vitrum, the company made a display of all his experience as manufacturer of glass working machines.

“Around our machines, we saw old and new Customers, people who were interested in finding out new technological innovations and others that came just to shake our hands because they have been knowing us for several years. “Trade fairs are always an opportunity for discussion, with Customers, suppliers and competitors, but they are also an important litmus test, because ,here, every time, also the company’s reputation and credibility are confirmed or called into question.”

“As I can see from the numerous visits and from the appreciation words, we close Vitrum 2019 satisfied and full of energy because once more, we had the confirmation, through our technology and service, that we are moving on the right direction”.

50th anniversary, an event to be remembered

The 3rd of October 2019 has been a day to remember: to celebrate its 50 years, the company was brought together in an exclusive location.

Around them, there were Customers from all over the world , agents and employees.

“We were more than 200 people, but it was like a family dinner!”, this is what most people  felt. Inside the authentic elegance of a farmhouse near Milan, they found the genuine affection of the Schiatti’s family to welcome them. We asked the guests to tell us “why Schiatti” and we composed a statistic. The most used word of the Customers was “trust”, for the agents, the favorite one was “proudness” while the one chosen by the employees was “family”.

A “top seller” machine must be efficient, fast and technologically advanced, and Schiatti machines have all these characteristics. Though, during the anniversary, were not the machines leaving to all participants the certainty of the bright future that awaits the company. When the leadership was gathered for the group photo, what lenses immortalized, was a solid and united family made of many generations. Some representative of the  Schiatti’s roots, others solid like a florid and strong tree trunk, and the last one, foamy and promising like spring buds. This was just one stage of Schiatti’s long trip started several years ago and intended to last much longer.

Selling of machines for glassworks: our foreign agents